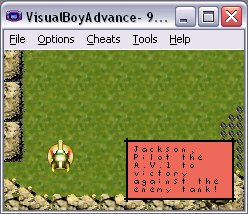 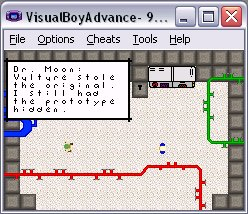 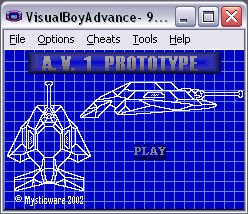 When Mysticware halted development, the GBA port of A.V.1: Prototype was never completed. There was a good tech demo (i.e. sprite roatation, tile scrolling); however, it was not complete and certainly not anything that could be reasonably shown to third parties.

At the turn of the year, I rediscovered my interest in working on a console. What came to mind was the potential completion of this GBA port. As a result, I worked with an updated version of the homebrewn HAM. Compared with the initial tools that I worked with at Mysticware, these current tools were robust and just simply awesome. For instance, the API that I originally worked with now had a full IDE attached. No longer did I have to deal with batch files or command line builds – I could not just press F5!

Technically, I fixed bugs related to: sprite rotation, fixed point math, and tile memory overwrites. I then ported: dialogue, AI, and maps. The result is a product that demonstrates rotation, scrolling, AI, collision, scripting, and UI.