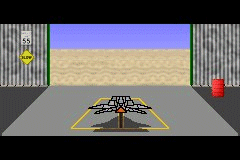 You assume the role of Jackson Moon – the son of a revolutionary inventor. Take your father’s newest prototype, the A.V.1, to protect your home planet, Sugusta, from the evil Volkon Mercenaries. There are several areas of the planet to traverse dotted with many enemy vehicles just waiting to stop Jackson and his noble effort.

A.V.1: Prototype was originally targeted for the Gameboy Advance. To get to that point, a PC version of the demo was created to display to potential publishers at E3 2002. There is currently a completled demo of this title for the PC and a WIP version of the demo for the GBA, which has been indefinitely placed on hold until a publisher wishes to support the development to its end.

The gameplay is pretty interesting in that it combines the rotation of a game like Asteroids with side-scrolling shooters like Gradius. Another unique aspect of this title is that it is a shooter with a fairly deep storyline. Many games that could be considered to be similar, have never taken a player through such a rich story.

My duties on this project were mainly focused upon the programming of the engine and tools. In fact, I was officially, the only programmer on this title, which was a nice affirmation that my willpower to complete a project had not waned after working on such a large team at my previous position. Since the rest of the developers on the team were not considered “seasoned”, I took the role as producer as well, although, since the team is so small and my concentration was mostly devoted to programming, production was a secondary concern in this case.